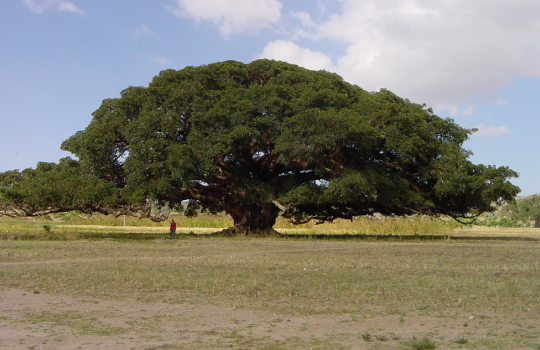 Annulliamo la Distanza (AnlaDi) was officially founded on 7 October 1997 in Florence, where the HQ is located, and immediately started to operate in Eritrea, a small country in the Horn of Africa, one of the youngest nations in the African continent.

The first interventions, which have been for many years the backbone of Annulliamo la Distanza’s work, dealt with distance adoptions and education.

In 2004, Annulliamo la Distanza realized the project ”Florence -Asmara Km. Zero “: the project consists of curing Eritrean children suffering from serious diseases in Italian Hospitals. This project has received numerous awards, including, in May 2006, the prize of the volunteering fair ”Civitas” in Padua.

In November of the same year, the first edition of Annulliamo la Distanza’s biannual magazine was published: it is about AnlaDi’s projects and development cooperation issues.

Still in 2004, Anladi inaugurated the new emergency department in the paediatric hospital Mekane Hiwet of Asmara, thanks to funds raised privately by the association. A plate with Anladi’s motto “children first” (registered trademark since 2011) in Tigrinya’s characters still stands above the entrance of the hospitals.

In March 2005, the association’s video “Eritrea through Anladi’s eyes”  was broadcasted at the Puccini Theatre of Florence.

In 2006, a short film entitled “Intolerance Zero” was presented. The creation of the movie, a manifesto against racism in the football world, was possible thanks to the collaboration of notorious directors such as Luigi Falorni (Oscar nominee 2005 and Golden Globe for the movie “The story of the weeping camel”) and Filippo Macelloni. The video has later been shown in many Italian stadiums thanks to the Football League, and it has been broadcasted by the Italian television channel RAI.

In 2007, in the occasion of its ten year anniversary, the association received from the Presidency of the Italian Republic a prestigious award “for the meritorious humanitarian initiatives undertaken by the Association in favour of children in Eritrea”.

2009 is a year of great change. After having worked for twelve years in the highlands of Eritrea, Anladi decided to expand its work in the rest of the world. In July of that year, the project “Adopt a Kindergarten” was designed for the construction of a kindergarten in the district of Puok, Cambodia.  It is the beginning of a small revolution: before 2011, new projects started in Kenya and Albania too.

In 2010, the project “Let’s walk together” was designed thanks to a partnership with Rizzoli Orthopaedic Institute of Bologna and the Eritrean Ministry of Health. The project’s purpose was to train local medical staff and to carry out surgical operations for children with various diseases. In the same year, the association inaugurated its first Kindergarten in Cambodia for 240 kids.

In December 2012, Annulliamo la Distanza received the award “A project for securing peace” in the Salone dei Cinquecento of Palazzo Vecchio in Florence, for the foster home project in Asmara, Eritrea, during the seventh edition of the Literary Award “Florence for cultures of peace”, dedicated to the author Tiziano Terzani.

In September 2013, Annulliamo la Distanza was recognized the status of Non-Governmental Organization (NGO) by the Ministry of Foreign Affairs, a significant token of appreciation for our work in favour of children living in developing countries, carried out during the long journey of the Association.

In December of the same year, AnlaDi won a call from the EU for the realisation of a project entitled “ Value Diversities”: the project aimed at enabling and including children and young people with mental disabilities in Eritrean society and schools

In 2014, AnlaDi received funding from UNICEF Eritrea (senza virgola) for completing the project “Operating Rooms”, which involved the construction of two new operating rooms for the department of paediatric orthopaedics at the Halibet Hospital in Asmara. The operating rooms were inaugurated in June 2015 by Italian authorities, Eritrean authorities and UNICEF delegates.

In November of the same year, AnlaDi launched the project “I know my rights” to spread the messages of The Convention on the Rights of the Child across Italian and non-Italian schools.  A dedicated website was created for this project: artworks from Albanian, Cambodian, Kenyan and Italian boys and girls were collected and displayed in an art exhibition.

In 2016, the Association launched the project “Adopt a Children Hospital in Eritrea”, co-funded by the EU Delegation to Eritrea. The project consisted of the rehabilitation of the ER of the Orotta Paediatric Hospital, the purchase of medical equipment, trainings to MD and health staff and a research study to detect early diabetes in paediatric age.

In 2017, AnlaDi reached its twentieth year of activity. A full day of celebration at the presence of local and national institutions, representatives of the countries where the association works, partners and many friends and supporters, represented a great occasion to give new impetus for future commitment.

In 2018, Annulliamo la Distanza signed a cooperation agreement with Meyer Children’s Hospital of Florence for implementing activities in health and social health sectors through trainings and exchange of good practices, with particular attention to the paediatric and public health areas.

In October 2019, the Emergency Dept of the Orotta Paediatric hospital in Asmara was inaugurated: it receives more than 30,000 children every year. This has been possible thanks to the collaboration between Annulliamo la Distanza, the Eritrean Ministry of Health and the EU Delegation of Asmara.
During the same period, the fifth mission of medical doctors and nurses of Meyer Hospital of Florence and of Carlo Pizzardi Hospital of Bologna took place, aimed at carrying out training courses on PBLS, EPALS and USG for Eritrean doctors and nurses of the Orotta Paediatric hospital. In total, over 110 young Eritrean health workers have been trained.

In January 2020, AnlaDi signed two MoU in Eritrea with the local Ministry of Health. The first one is about implementing the project for the renovation of the first floor of the Orotta Paediatric hospital. The second one is about the implementation of the water project at the Orotta hospital that will guarantee access to water for all children,  24 hours a day. This project is called “I want you to drink so badly” and is entirely financed by AICS (Italian Agency for Development Cooperation).

In April 2020, Anladi ranked first among the projects approved by Tuscany Region, from which it received a significant financial contribution to continue the renovating activities at the Eritrean Orotta Paediatric Hospital.